Augusta, Ga. (April 25, 2017) – Textron Specialized Vehicles Inc., a Textron Inc. (NYSE: TXT) company, announced to its dealer network its plan for growth as it incorporates Arctic Cat into the company, including its future powersports brand portfolio, and a tease of new and upcoming products across its snowmobile, side-by-side and ATV product lines.

Company President and CEO Kevin Holleran welcomed a select gathering of employees and dealers in Texas, and outlined the value and synergies that Arctic Cat and Textron bring to each other. Arctic Cat joins a portfolio of Textron brands and products that includes not just E-Z-GO golf cars and Textron Off Road side-by-sides, but also Cessna and Beechcraft fixed-wing aircraft, Bell helicopters, Greenlee professional tools, Kautex automotive fuel systems, and many other leading products in industries across the globe, Holleran said.

“Everything Textron Specialized Vehicles makes is created by tapping the same world-class engineering expertise, manufacturing know-how and Fortune 500 resources that power these brands,” he said, pointing out as an example that TSV Vice President, Engineering Chris Spencer spent more than two decades at Bell Helicopter as a lead engineer on military programs such as the Bell-Boeing V-22 Osprey.

“Moving forward, the company will transition all side-by-sides and ATV’s to become a part of the Textron Off Road brand,” said John Collins, TSV vice president, consumer. The iconic Arctic Cat brand, built on decades of performance and leadership in snowmobiles, will remain in use on the company’s innovative, high-performance snowmobile product lines.

Arctic Cat’s legacy and heritage in side-by-sides and ATVs will also live on in the powerful Alterra™, Wildcat™ and Prowler™ products, which will join Textron Off Road’s existing Stampede® side-by-side in the company’s family of off-road vehicles. 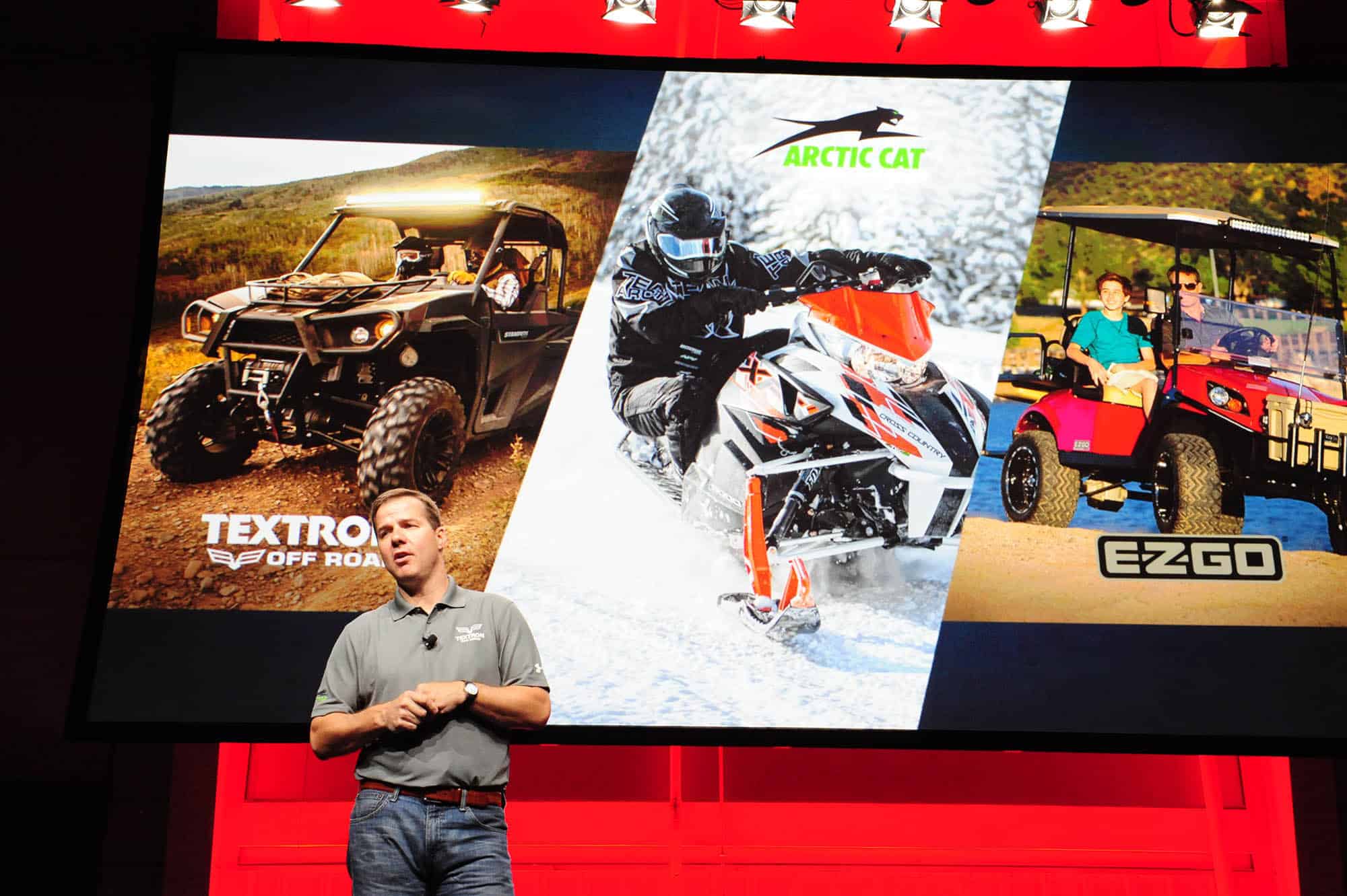 The decision to rebrand side-by-sides and ATVs under the Textron Off Road name was not taken lightly, Collins said, and was the result of consultation and research with consumers and dealers that showed that the Textron Off Road brand offered the best opportunity for future growth across all regions, particularly outside of the snow belt.

Collins revealed a sneak peek of the next Textron Off Road-branded side-by-side, to be released this fall. As yet unnamed, this new “crossover” vehicle will bridge the gap between utility side-by-sides and sport models, with 100-plus horsepower, a class-leading suspension set apart by King Shocks, bucket seats and an extended cab with industry-leading, usable storage.

In addition, Collins announced more details of the next-generation Wildcat sport side-by-side, the Wildcat XX, which will be released in spring 2018. Powered by a 998cc triple engine generating 125hp, the Wildcat XX will also feature a suspension with King shocks and 18- inches of suspension travel, 30-inch tires on 15-inch KMC wheels, and full doors.

Collins also outlined the tremendous opportunity that E-Z-GO models offer the dealer network, by bringing to the powersports dealer a new customer base seeking the brand’s line of personal golf cars and transportation vehicles.

“Carrying all three of these brands, and attracting each of their distinct customer bases, can create a truly unique opportunity for growth,” Collins stated.

Textron’s engineering expertise and resources will accelerate the pace of technological innovation in Arctic Cat’s already groundbreaking snowmobiles, said Erik Nelson, TSV president and general manager, snow and international. Nelson stressed that the Arctic Cat brand will always live on in the company’s snow products. New snowmobiles such as the

M 8000 and ZR 8000, with the new 800cc C-TEC2 two-stroke twin engine, and the ZR200 youth model, are generating strong interest from enthusiasts in advance of the winter season, Nelson said.

The event took place in an airplane hangar at Fort Worth’s Alliance Airport, where an extensive display of Textron products underscored the company’s technological DNA and marketing might. Arctic Cat products stood alongside the Textron Off Road Stampede side-by-side and an array of E-Z-GO personal transportation vehicles. Flanking the stage were a Bell 407GXP helicopter and the Textron AirLand Scorpion, a tactical jet aircraft designed for a variety of roles and missions, including intelligence, surveillance and reconnaissance (ISR), maritime control, close air support, armed reconnaissance and pilot training.